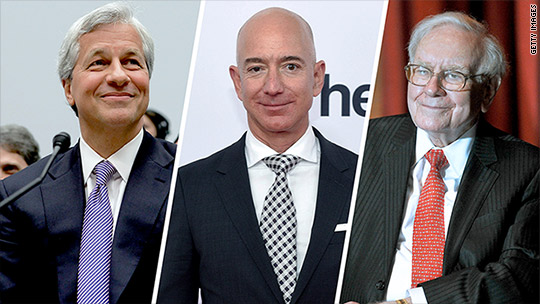 In an announcement, the companies said they are “partnering on ways to address health care for their U.S. employees, with the aim of improving employee satisfaction and reducing costs.”

The effort was described as in its early planning stages.

The three companies combined have thousands of employees in Colorado. Berkshire owns Denver-based Johns Manville and many other businesses with local operations, while Amazon operates several distribution facilities in metro Denver and owns the Whole Foods Market chain, and Chase is one of Colorado’s largest banks.

“The three companies, which bring their scale and complementary expertise to this long-term effort, will pursue this objective through an independent company that is free from profit-making incentives and constraints,” today’s announcement said. “The initial focus of the new company will be on technology solutions that will provide U.S. employees and their families with simplified, high-quality and transparent healthcare at a reasonable cost.”

The three companies said they would each provide executives to launch the new venture: Todd Combs, an investment officer of Berkshire Hathaway; Marvelle Sullivan Berchtold, a managing director of JPMorgan Chase; and Beth Galetti, a senior vice president at Amazon.

“The ballooning costs of health care act as a hungry tapeworm on the American economy,” Buffett said in the announcement. “Our group does not come to this problem with answers. But we also do not accept it as inevitable. Rather, we share the belief that putting our collective resources behind the country’s best talent can, in time, check the rise in health costs while concurrently enhancing patient satisfaction and outcomes.”

Jeff Bezos, CEO of Amazon, added that “the health care system is complex, and we enter into this challenge open-eyed about the degree of difficulty. Hard as it might be, reducing health care’s burden on the economy while improving outcomes for employees and their families would be worth the effort. Success is going to require talented experts, a beginner’s mind, and a long-term orientation.”

“Our people want transparency, knowledge and control when it comes to managing their healthcare,” said Jamie Dimon, chairman and CEO of JPMorgan Chase. “The three of our companies have extraordinary resources, and our goal is to create solutions that benefit our U.S. employees, their families and, potentially, all Americans.”

The announcement comes as employers continue to grapple with the rising cost of health care.

Several health-insurance stocks were dropping early today on the news, along with the shares of a number of health-products distributors, pharmacy-benefit managers and drugmakers, MarketWatch reports.

The declines “reflect investor concerns that the Amazon, Berkshire Hathaway and JPMorgan initiative could shake up the status quo, especially given the three companies’ large size and influential nature, and the potential interest of other employers in joining them. U.S. health care costs continue to rise year over year despite efforts to curb them, and many experts believe the fault lies with too-high prices,” MarketWatch observed.

The announcement harks back to the origins of Kaiser Permanente in California as a health care program created for construction, shipyard and steel mill workers of the Kaiser industrial companies in the late 1930s.